Pepper plants are a classic warm-weather crop for home gardeners. But did you know that growing peppers can be a little tricky? It’s true. Sometimes you need to spend a little extra effort creating an ideal environment for your pepper plants to grow. But once you do, you’ll be rewarded with a beautiful and thriving garden. 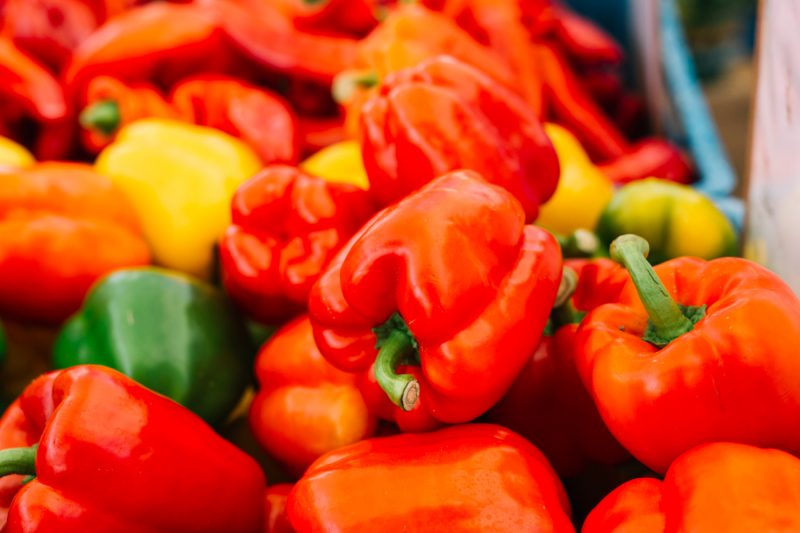 The right site can make all the difference in how well peppers perform. Choose a sunny, well-drained spot where peppers haven’t grown recently. The soil should be deep, rich, and loamy. If yours isn’t, amend it with about 1 inch of compost.

Avoid adding too much nitrogen to the soil, however. Excessive nitrogen can cause the pepper plants to grow too fast, making them more susceptible to disease and less productive.

Peppers like warmth, so wait to plant until nighttime temperatures have consistently reached 60 degrees and all danger of frost has passed. If possible, set out your peppers on a cloudy day to help reduce stress on the plants. Space the plants 12 to 20 inches apart, depending on the mature size of the variety, and set them a bit deeper than they were in their containers. (Like tomatoes, peppers grow extra roots from the buried portion of the stem.)

Add 2 to 3 pounds of fertilizer such as 10-10-10 per 100 square feet of garden area. Spread the fertilizer evenly over the garden. Work it into the soil.

If you will plant single plants, place about 2 level tablespoons of fertilizer like Espoma Garden Tone on the soil in the planting area. Mix it well with the soil

Even though peppers love the heat, these plants need water. Peppers need about 2 inches of water a day in order to thrive. If the weather is extremely hot, they may need up to a gallon of water. Do not allow the soil to dry out completely, water frequently and at the base of the plant to prevent sunburn.

Mulch is instrumental is growing healthy pepper plants. Adding about an inch of mulch to your pepper plants helps retain moisture in the soil. Because pepper plants need to be watered frequently, the mulch protects the soil and retains the water, even in direct sunlight. 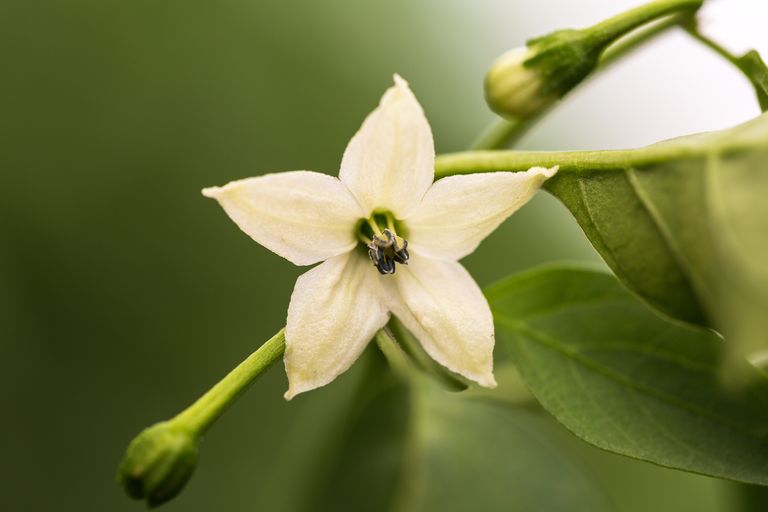 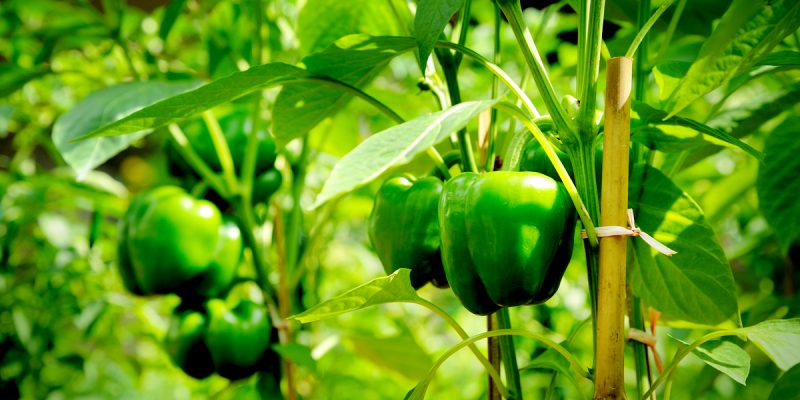 Pepper plants can get large and fall over quickly, especially with the weight of any peppers. Providing a stake or cage for the plant keeps your peppers standing upright, allowing the plant to thrive and the peppers to mature. To get the most out of your plants, be sure to add support.

As weird as it may seem, pinch off any early blossoms that appear on your pepper plants. This won’t harm the plants. In fact, it helps them direct their energy into growing, so you get lots of large fruits later in the season (and a higher overall yield) instead of just a few small fruits early on.

You can keep your plants producing more hot peppers by harvesting regularly once they reach an edible size. Many gardeners like to allow their peppers to fully ripen and change color.

Cut the fruits from the plant; don’t pull. Hot peppers are best used within a few days of harvest. They can also be canned or frozen. NOTE: Wear gloves when handling, as the oils from hot peppers can irritate skin and eyes. 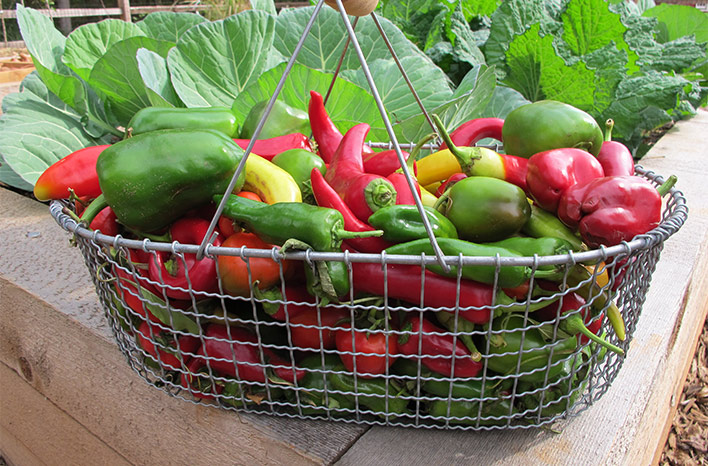 Bell peppers, also known as the Grossum group peppers, are large, sweet peppers with a high water content that can be enjoyed fresh or cooked. Some varieties start green and bitter-tasting before maturing to red and reaching their flavor potential. Others will stay green, and some mature to white, orange, pink, or purple. Red bell peppers are generally the sweetest while orange bell peppers are tangy.

Cajun Belle is an All-America Selections-winning bell pepper plant that grows fruit that are 2 to 3 inches long. The plants grow to be 2 feet tall and wide, making them perfect for small plots or container gardens and are known for disease resistance. They are quick to reach maturity; just 60 days. The peppers may be picked while green or allowed to mature to a red luster. The flavor is mildly spicy.

Islander is a three-lobed bell pepper that starts purple, turns yellow with orange streaks, and then red. They may be enjoyed while still lavender-colored or picked after fully ripening. The flavor is mild and slightly sweet.

Banana pepper is chili pepper that’s bright yellow and curved, like a banana, though only 2 to 3 inches long. They are not all that hot — just 0-500 on the Scoville scale. The more mature they are when picked, the sweeter they will be. Banana pepper is also called yellow wax pepper.

Poblano is a mild chili pepper that is called an ancho when dried. It is one of the most popular chilis in Mexican cuisine. There are many recipes readily available for enjoying stuffed poblanos, while ancho chilis are used in mole sauce. Poblanos are typically between 1,000–1,500 Scoville units.

Jalapeno is a popular chili pepper often used in salsa and pico de gallo. Fried with cheese, they make jalapeno “poppers.” The fruit typically grows to be 3 inches long on plants that grow between 14 and 18 inches tall. Jalapenos are usually picked while they are still green but, if left on the plant long enough, they will turn black and then red. Jalapeno peppers are between 2,500–8,000 Scoville units. White scars, called “corking,” on older fruit indicate a pepper will be hotter.

Hungarian hot wax looks like a banana pepper but is hotter, anywhere from 1,000 to 15,000 on the Scoville scale. The fruit grows to be between 4 and 6 inches long and is typically harvested before they mature when they turn orange and then red. These are popular pickling peppers.

Cayenne is used as a ground spice or in pepper sauce, and it’s even an ingredient in squirrel repellent. The skinny red chiles grow to be 6 to 8 inches long. Cayenne peppers are 30,000 to 50,000 Scoville units.

Tabasco is a small pepper that packs heat — 30,000–50,000 on the Scoville scale. It gives its name to Tabasco sauce and is used for flavoring vinegar. They grow upright, changing colors from yellow to orange to red, making them attractive ornamental plants in pots.

Habanero is a variety of chile pepper popular in hot sauce and salsa. The fruit is 1 to 2 inches long, and cultivars are typically red or bright orange when ripe, though they can also be white or purple. Habaneros are known for being hot (100,000–350,000 Scoville units) but there are new “heat-less” varieties as well.

Scotch bonnet is a C. chinense chile pepper, like habanero, with a heat rating of 100,000–350,000. It is named for its odd shape, which resembles a traditional Scottish hot. It is sweeter and smaller than a habanero.

Thai: This pepper has tiny, elongated fruits that pack a Scoville rating of up to 100,000 units. 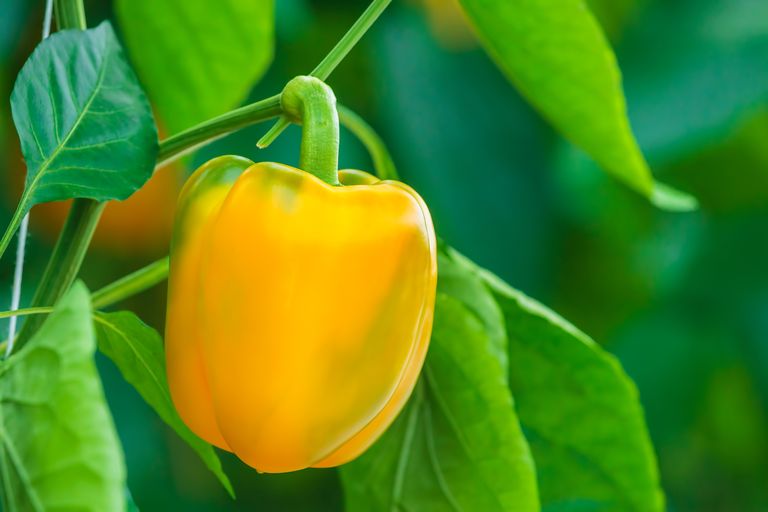 There are so many different types of peppers you can grow, don’t be afraid to experiment!

Capsaicin is the chemical that gives peppers their heat, so you’ll want to consider this when you’re deciding which pepper varieties you’d like to plant. Sweet peppers are perfect if you aren’t looking for anything spicy, and bell peppers are a good starting point.

On the other hand, hot peppers have a wide range of spiciness, which is measured on the Scoville heat scale. Habanero, jalapeño, and Thai chili peppers are great options if you’d like to add some bold flavor to your cooking.

Keep an eye out for pests and diseases lurking in your pepper garden. Left unchecked, they could ruin your crop for the season.

If you’re going to grow peppers each year, consider rotating where you plant them. Switching up their location can save them from root diseases and maintain soil integrity.

Spreading mulch can safeguard against insects while keeping the soil warm and helping with drainage. Maintaining proper soil moisture is essential to avoiding disease. Don’t be surprised if blossom end rot takes hold if the soil around your pepper plants gets waterlogged.

Look for whitish blotches or stunted leaf growth. It could be a sign of a mosaic virus, which is generally spread from plant to plant by aphids.

Aphids are a common crop-ruining visitor when you’re growing peppers. However, they make a delicious treat for ladybugs who will love being on patrol to keep troublesome aphids out of your garden.

Cutworms can slice off young plants at ground level. Wrapping the base of the plants with foil, toilet paper tubes, or something similar will thwart them. Even toothpicks on either side of the stem will do the trick.

Another option is to choose pest- and disease-resistant varieties of peppers. While it doesn’t mean you’ll never have an issue in your garden, you can expect fewer problems with certain types of peppers. California Wonder, Keystone Resistant Giant, Jupiter, Sweet Banana, and Gypsy peppers are all good choices. Imgae by Susanna Cesareo. 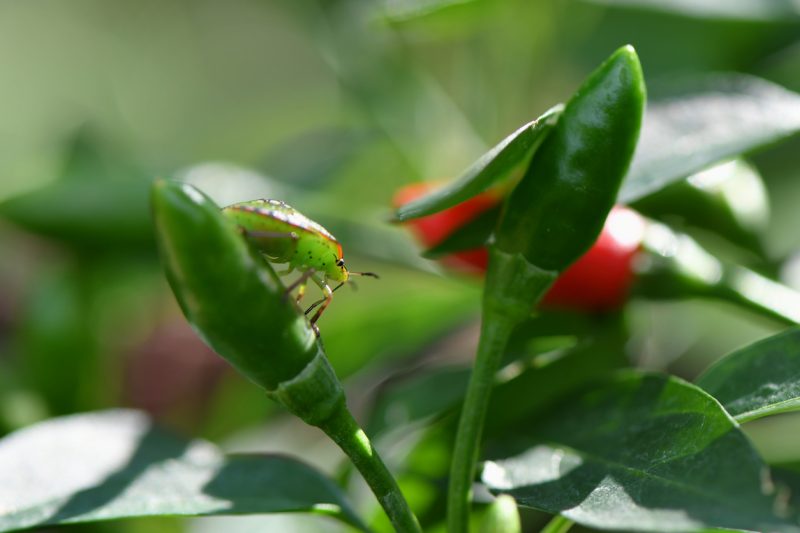 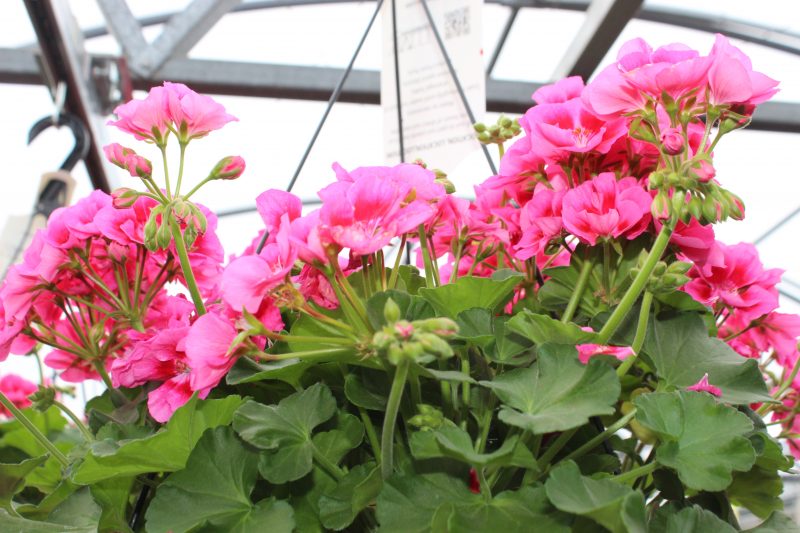 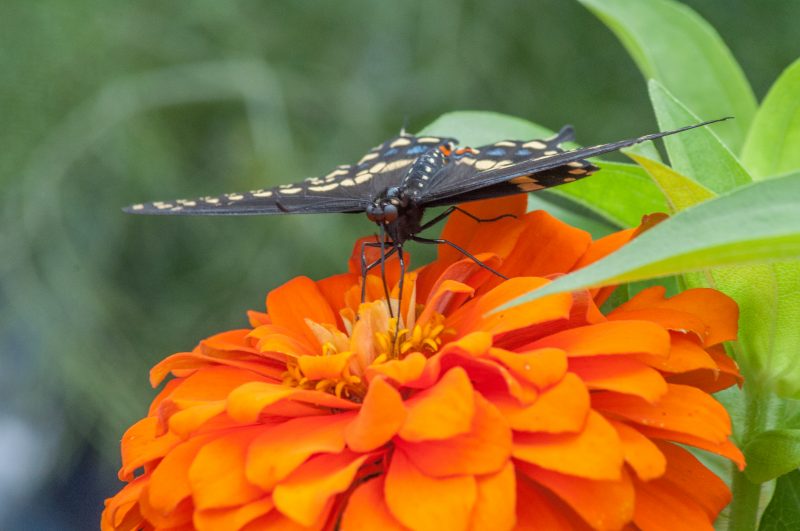 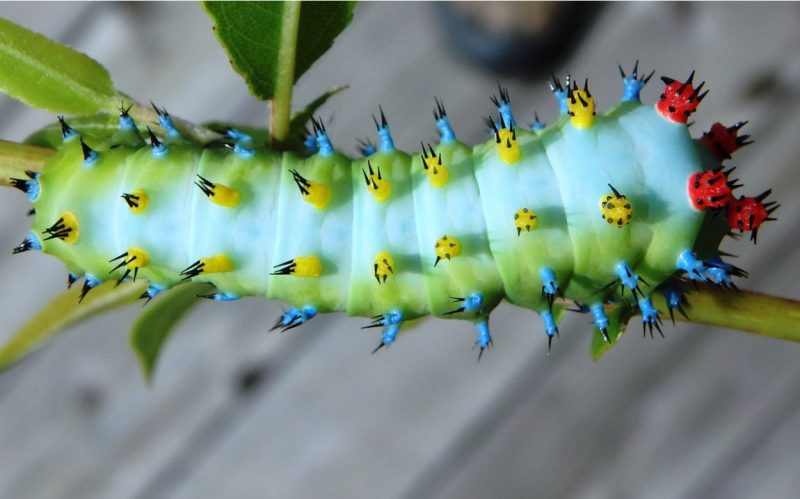 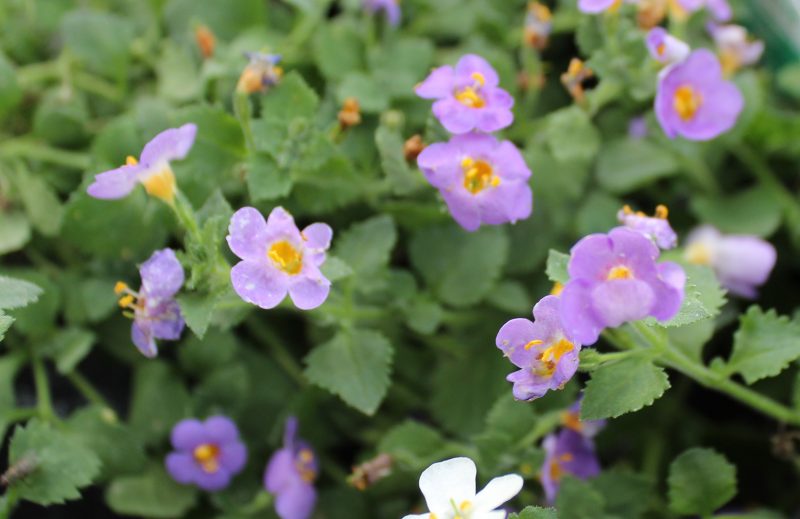 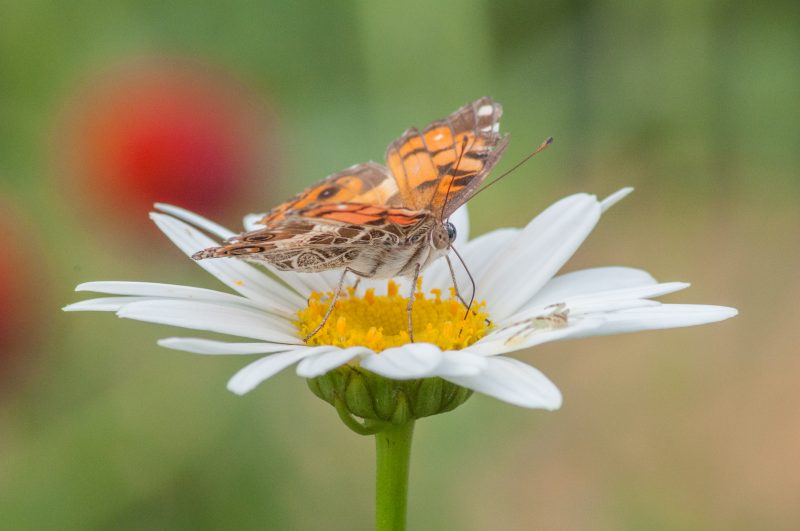 This website uses cookies to improve your experience while you navigate through the website. Out of these, the cookies that are categorized as necessary are stored on your browser as they are essential for the working of basic functionalities of the website. We also use third-party cookies that help us analyze and understand how you use this website. These cookies will be stored in your browser only with your consent. You also have the option to opt-out of these cookies. But opting out of some of these cookies may affect your browsing experience.
Necessary Always Enabled
Necessary cookies are absolutely essential for the website to function properly. These cookies ensure basic functionalities and security features of the website, anonymously.
Functional
Functional cookies help to perform certain functionalities like sharing the content of the website on social media platforms, collect feedbacks, and other third-party features.
Performance
Performance cookies are used to understand and analyze the key performance indexes of the website which helps in delivering a better user experience for the visitors.
Analytics
Analytical cookies are used to understand how visitors interact with the website. These cookies help provide information on metrics the number of visitors, bounce rate, traffic source, etc.
Advertisement
Advertisement cookies are used to provide visitors with relevant ads and marketing campaigns. These cookies track visitors across websites and collect information to provide customized ads.
Others
Other uncategorized cookies are those that are being analyzed and have not been classified into a category as yet.
SAVE & ACCEPT
X